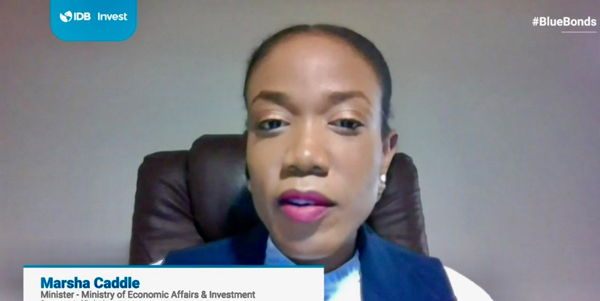 Barbados is set to make further major investments in the development of its blue economy. This from Minster in the Ministry of Economic Affairs and Investment Marsha Caddle as she participated in the Inter-American Develop-ment Bank’s (IDB) Invest webinar titled ‘Accelerating Blue Bond Issuances in Latin America and the Caribbean’ yesterday. During a discussion with CEO of IDB Invest James Scriven, Minister Caddle highlighted the island’s plans for the efficient utilisation of its ocean resource.

With the IDB Invest Blue Bonds serving as financing solutions aimed at expanding the blue economy in the region and propelling transformation towards a sustainable ocean economy, it was revealed that the goal was the generation of new jobs to integrate small scale economies into global economies while protecting and preserving the environment.

Noting that Barbados’ marine space was 424 times our land space and that we were leveraging our legacy of fishing towards charting our way forward, Caddle stated that we would have to look at how to take advantage of the resources in our ocean economy and ensure they are developed in a sustainable way. Drawing reference to the ministry that was tasked with ensuring that the island reached those goals, she explained that Barbados was well on its way.

“We established, three years ago, a Ministry of Maritime Affairs and the Blue Economy, and you always say, ‘If you want an idea of where a government’s priorities are, look at its budget’ but also look at how it arranges its governance to be able to be effective. By establishing that ministry, we were very clear that we intend for the marine economy to be very much at the heart of what we do in Barbados to be able to provide for our people and improve their wellbeing,” she said.

Caddle also revealed that there were several targets set for 2030 by the ministry to see the sector built out, one of the most ambitious being to create the most blue-skilled human resource in the world by that date. Going on to say that the plan was to fully exploit the tourism, energy, marine technology, health and nutrition, bio-economy and bio-technology and marine industrial services provided by the ocean, she noted that there needed to be a balance to ensure the viability of the project.

“There can be no separation of the development of the space in its use to increase its contribution to GDP and its sustainable development. We see how important the regeneration of the reefs is and what it means to make sure that the blue economy and the marine environment remain healthy, that we are able to continue to have a relationship between people and the ocean. If we don’t protect the environment while we’re able to benefit from it, all that will be in vain.”

Making mention of several other areas of investment that have been developing and are in the sights of Barbados such as sea-mossfarming, electrical boat design and building, offshore wind and solar energy, and hydrogen energy generation and storage, Minister Caddle stated that Barbados was all-in. “The blue economy is at the centre of everything that we do, it is at the centre of the way that we live. We see it as a way to greatly expand opportunities for people, but we also see it as a way to generate investment opportunities and to make sure that we are able to achieve all of the sustainable development goals in the time that we have set.” she said. (MP)