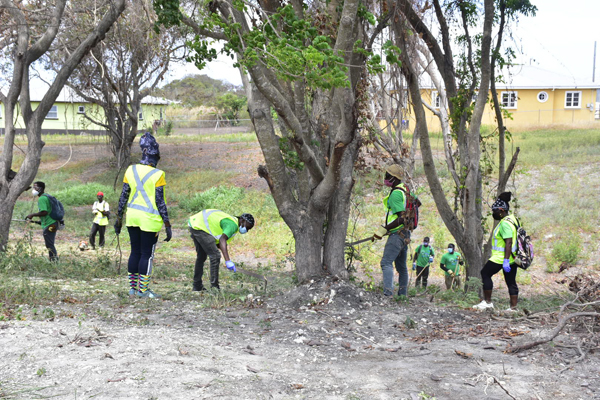 THE Ministry of Environment and National Beautification began the transformation of a local area in Friendly Hall, St. Lucy yesterday, as it sought to bring the dream of a park and community biodiversity green space to the community.

The project is part of the National Clean and Green Programme of the ministry and the launch involved members of the neighborhood as well as some of the 720 people employed by the ministry to help clean communities across Barbados. Minister of Environment and National Beautification, Adrian Forde, officially launched the project, in the presence of Peter Phillips, MP for St. Lucy.

Forde highlighted that St. Lucy was the only parish of the island which had a female name and said there was something special about the parish. He explained that the project in Friendly Hall was an important one as it would offer even more beauty to the already pretty parish.

“We are going to redefine the basic way of life in St. Lucy. St. Lucy must be recognised as any other part of Barbados in terms of cleaning and greening. The rustic Barbados must have an appreciation for this beautiful theme,” said Forde.

Co-ordinator with the Biodiversity, Conservation and Management in the Ministry of Environment and National Beautification, Rohan Payne, in his remarks, said that the initiative tied into the broader scope of the ministry to protect and preserve biodiversity and land resources.

“Barbados is one of the more developed nations within the Caribbean. We are doing our best within the Ministry of Environment to balance that development in an integrated way with the preservation and restoration of our natural spaces,” he said.

“As we develop areas for commercial and residential purposes, we are also looking at restoring degraded systems, degraded spaces and making them green.”

Payne went on to say that areas like the one being used in Friendly Hall, sometimes had fallen into disuse but the ministry would transform them into oases of green. The plan is to plant trees, bringing back flowers which would encourage such things as butterflies, bees, endemic birds of Barbados and the migratory species. He pointed out that the work being done to create these pristine clean spaces would spill over into the surrounding communities and improve the ecosystems all over the island.

MP for St. Lucy, Peter Phillips, added that it was his intention to make the space at Friendly Hall, one of the hallmarks of the Clean and Green initiative. He explained that the ministry recognised that the environment was important and he always asked people not to dump things in the gullies, for fear of blockage of wells.

“Do not dump illegally, because it will come back to bite you down the road. As we embark on this project today, in a couple weeks you will see a lot of work being done in this area,” said Phillips.

“I want to thank residents of this community who have come forward already, even before this started, to say they want to be part of this and wanted to help take care of the maintenance of the actual park.” (AS)

Sweet Home, St. Peter ​Would you like to invest in…